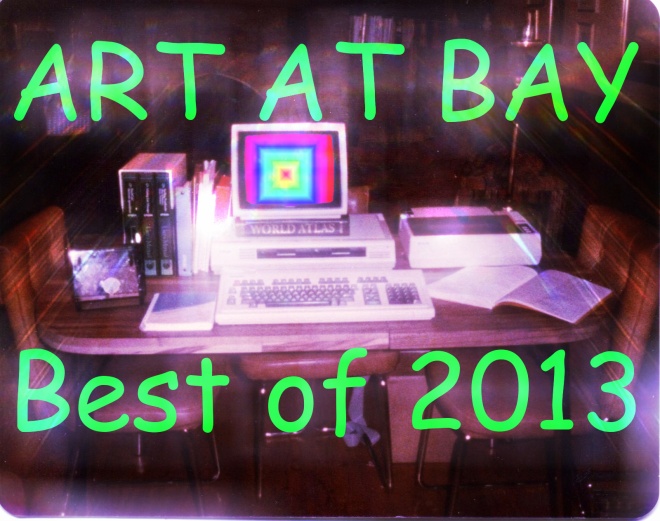 I realize, now that I’ve actually written this article, that I’ve basically made a list of things that don’t deserve to be on an end-of-year list and the effort on a whole may be counterproductive.  But it ends here.  Though I personally lost interest in these five topics over the course of 2013, they nevertheless seemed to continually fetch art news headlines and even found their way onto my own Twitter/Facebook feed (I’m powerless against reposting this stuff.)  Thus, I’m getting it out now and leaving it here in 2013.

Art Review Magazine annually produces the Power 100, “a ranked list of the contemporary artworld’s most powerful figures.”  With this year’s omission of any art writers and critics, I thought I could muster some passion over this one.  I couldn’t.  Like many people, I gave it shot and still don’t really care about the list.  In the end, perhaps the worst thing for the Power 100 isn’t for people to disagree with it, but for no one to pay attention.

In some sense the list may be entirely accurate.  However, it seems to often come across as a cheat sheet of people to whom you should suck up.  In a field especially preoccupied with power dynamics, post-colonialism, race politics, and gender politics a list of the “artworld’s most powerful figures” seems like a horrible idea.  I suspect many give it attention because of its list and ranking format (who can resist a good list? Hence the format of this series).  Maybe the ranking’s name should be more specific: “The Power 100 for Dealers and Collectors”.  Personally, I’d rather see a list of people making the best most exciting contributions to contemporary art.

“Better Out Than In”, Street Artist Banksy’s month-long New York City “residency”, took place this past October.  For the duration of the month, Banksy would create a street art installation and announce it on his website the next day.  Despite the hefty press coverage (you know it’s serious when CNN calls in Jerry Saltz to explain the matter), my attention level hardly rose above ‘bored’.

Banksy’s work invests itself with little more than empty wit.  Satisfied with good intentions and little forethought, his street art pieces are conceptual one-liners.  They are funny or interesting at first but offer little beyond an initial reaction.  There is a lot of street art with substantial thought and concept behind it (e.g. check out the work of Mata Ruda) – Banksy’s isn’t it.  For all of the finger-poking at art-world-economics, Banksy seems to ignore the fact that his work is worth tens to hundreds of thousands of dollars.  He essentially leaves a fortune in public and politely excuses himself from the inevitable feeding frenzy – it’s either naive or irresponsible.  This doesn’t make me angry as much as it informs me that Banksy is not an artist worth taking seriously.

ArtPrize is a city-wide art fair held annually in Grand Rapids, Michigan. The fair is a giant competition with two main prizes: a popular prize and a critical one.  It’s easy to foresee what kind of art typically wins the popular vote prize: like politics, it’s hardly ever the most deserving and almost always the easiest on the sensibilities.  The juried prize feels like an afterthought, a last-ditch effort at salvaging credibility.  Indeed, the prize monies seem to reflect this.  The total juried prize is less than half the size of the total popular prize. Maybe ArtPrize condones a short-attention-span-coddling sort of art.  It definitely makes for a boring fair dominated by gimmick and kitsch.

2013 seems to heretofore seen more celebrities involved with art more than any other year.  I’m not blanketly condemning celebrities practicing in fine art.  But a rapper rapping at a gallery?  A movie star sleeping at the MoMA?!  I don’t call my day job performance art.  It’s a sad day when one can accurately call James Franco the hardest working celebrity in art.

I suppose the point is that all of this art is interesting because these “artists” are famous.  However, their fame is minimally to never addressed in the work.  Thus, these “pieces” are robbed of the very little they had going for it in the first place.  It’s a waste of time, attention, and exhibition space; it’s a regression in fame and class; it’s boring.  Please, celebrities: really give art the ol’ college try or just stick to your field of entertainment.

Despite all of the price tag record-setting, self-congratulatory press releases, and art news headlines, 2013 is the year I stopped caring about high-end art auctions.  I’m not saying this out of some anti-capitalist sentiment.  Not entirely.  Sales for a single work of art reaching into the tens and even hundreds of millions is meaningless to a middle class person like me.  My daily life provides me with absolutely no points of reference that shed light on what $142.4 Million dollars means.  Saying that amount is about the same as 783 of my mortgages doesn’t help very much.

Further, when it comes to art auctions the conversation is typically limited to topics such as ‘who is purchasing the piece?’, ‘how much are they paying for it?’, and ‘where is the piece going?’  These may possibly be the most boring and trivial aspects of a work of art.  I’m also concerned that continuing to tout these absurdly high auction earnings only ensures that the art world will be the first against the wall in the upcoming homeless revolution.