We finally begin our “Best of 2013” lists.  I never liked writing them and always enjoyed reading them for the same reasons: they’re reductionist, judgmental, and sound-byte sized thoughts.  Thus, to appease ourselves as both writers and readers, we decided to bring you a series of ‘alternative’ best of 2013 lists.  We begin with the best moments in hip hop in art in 2013.  Over the past few years nary a music genre has been as involved with the art world as rap and hip hop.  Here are some of our favorite moments over the past year.  Have some of your own?  Share them with us in the comments below or on Facebook.

Perhaps it had been coming for a while.  In retrospect it seems Marina Abramovic’s credibility died a slow death.  Yet, on the day of her Picasso, Baby “performance art” collaboration with Jay-Z it felt like it was murdered.  Athough, tweets such as this one:

The dream finale would be for James and Tilda to join the rapping. Performance art has died today. Bye

turned out to be histrionic, the art world’s esteem for Abramovic hasn’t since been the same.  The video of Jerry Saltz “performing” with Jay-Z is almost as difficult to watch as that of Mos Def’s force feeding (see #1).  There was too much wrong with the piece to sum up in a “best of” list, but it seems it can be summarily explained simply by checking the pictures of rich people dancing with Jay-Z and calling it performance art.  To me it seemed more akin to a marathon session of ego heavy petting with an over-dose of lip biting and excessive upper body movement dancing. 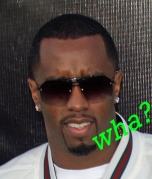 This moment makes the list for its sheer tragicomic hilariousadness.  At the VIP and press preview for Art Basel Miami, Jeffrey Deitch reportedly said “Hi, Kanye” to Sean “Diddy” Combs.  Diddy stayed classy and laughed it off.  Deitch explains:

There was a big crowd gathered at the entrance to an art fair booth. I asked the dealer what the commotion was about and she said, ‘Kanye is here.’ I could only see the person from the back, and went over to say ‘Hi Kanye’. To my great embarrassment, it turned out to be P Diddy. He thought it was very funny, especially since we had spent several hours together visiting my street art show in Los Angeles.

It honestly seemed like an innocent mistake rather than an example of the so-called cross-race effect.  Still funny.

Personally, I really like the musical work of Chicago’s Lupe Fiasco.  Beyond his early albums, having his Twitter keys snatched by his management following some Marxist tweets perhaps revealed further promise (and a pleasant contrast against hip hop materialism).  Lupe Fiasco, under his real name Wasalu Muhammad Jaco, ventures into visual art with his current solo exhibit, Bound, at the West Village gallery Anonymous.  The anchor of the show is a series of ‘ironic’ photographs – photos of Jaco touching “Do Not Touch” signs in various art museums.  The images are mildly entertaining with clear commentary on institutional art spaces and private property.  However, the work seems like it would feel more at home as Tumblr blog or Instagram account.  The work is accompanied by deterrents as that, as the gallery describes, work as a “physical/psychological barrier, or Boundary if you will, between the photo and the observer.”  Had this come from any of the other rappers on the list (save for Mos Def) it would’ve been a hit with me – perhaps I expected more from Lupe Fiasco.  Did you read those tweets?  This guy is smart.  Still, ‘A’ for effort and the witty idea.  I’m curious to see what any future visual art outings will look like. 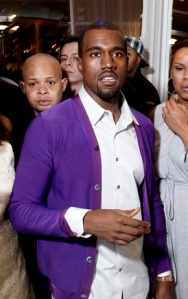 Kanye West’s life of late, especially in 2013, has made for gripping reads (and even critical discussion).  Being a regular in the art world a lot of the TMZ-ish news involved art in some way.  For example, there are his self comparisons to Leonardo Da Vinci and Michelangelo.  We also enjoyed a recent claim that his career is a “giant art project” (perhaps a la Joquin Phoenix’s rap career?).  Don’t forget his sit-down with super curator Hans Ulrich-Obrist which gave us “What did I paint when I was a kid in art school? I would paint music.”  We even got a critical deconstruction of Kanye West and his career courtesy of Jerry Saltz.  Still, despite the general tone assigned to coverage of Kanye its difficult for me to doubt that he is indeed the genius he eagerly admits to being.  In fact, he seems to be cut from the same fabric as Bret Easton Ellis: we’d love to dismiss them entirely because of their sheer arrogance and general jerk-ishness if it weren’t for their undeniable smarts and talent.  In regards to Kanye West, however, it does/can reveal a lot about how a largely white media may attempt to undermine an arrogant black creative.

Producer/songwriter/singer/rapper Pharrell Williams is another hip hop artist that is definitely not new to art.  Check out some of his sculptural work at Galerie Perrotin or previous collab with Takashi Murakami.  Pharrell sightings were a staple at this year’s art world spring break…er Art Basel.  While I may find his visual work unimpressive he at least seems to genuinely enjoy contemporary art, in contrast to other hip hop artists that often appear to treat art collecting as simply the new and classier “making it rain”.  For his collaboration with Daniel Arsham a series of 1980’s Casio Keyboards were created using material such as volcanic ash.  The keyboard, the instrument Pharrell first used to create music, are created in a way to make them resemble fossilized archaeological finds.  If perhaps a bit conceptually obvious, the work is at least sincere.

It was never entirely clear whether this entry was a proper performance art piece or something else entirely.  Regardless, it was definitely a powerful protest and perhaps the most artistic thing on my list.  Yasiin Bey (formerly Mos Def) created the video in collaboration with the human rights group Reprieve.  In it he undergoes force feeding according to guidelines for the procedure as it’s carried out with Guantanamo detainees.  I’ll admit the video is disturbing and I couldn’t watch it in its entirety.  Bey is clearly in extreme pain throughout and at one point begins sobbing.  I admire his commitment and though the bar for rapper-based performance art isn’t especially high, Bey’s video carried serious impact.