Melanie Graham’s ‘ Our Table’, an installation inspired by the awareness of violence involving women and girls, creates a subtle but powerful message.

Graham’s installation seemed at bit unorganized at first, but once examined, I noticed that her concepts, especially the parallels she creates between food decay and abductions, are quite interesting and ingenious – not to mention quite impactful.

The Project is based on personal research and meetings with the families of missing women and girls. Her discoveries culminated in a planned feast especially dedicated to the six missing/ abducted women and girls featured in the show. With the exhibition, she hopes to draw attention to this growing issue of social injustice in our culture.

‘Our Table’ is comprised of five tables, each accompanied by personal photos provided by the families, favorite foods, and personal objects. The show is tied in quite nicely with Graham’s poetry; brilliant and powerful words that addressed the issues at hand quite strongly.

“I had a thought one day, that if anything terrible ever happened to her, I’d never be able to drink another Dr. Pepper (Graham said), which led me to pondering the emotional connections we have with food and people we love, which in turn made me think about the families of missing people.”

If there’s once thing that still lingers in my mind about this particular installation is the rotting food. I guess I forgot to mention that the food placed on these tables have been there since the day of the opening (Nov. 12th, 2013). As you can imagine, fresh foods go bad pretty quickly if not refrigerated. Except for the McDonald’s burger and fries found in one of the girl’s tables, much of the food left behind, has been filled with black and green mold. The decay is quite repulsive, and I think that this is what Graham was looking for.

Although the smell wasn’t an issue ( all of the fresh foods were covered with a glass lid), it was impossible to not imagine the smell of the rooting foods. Both the look and the smell (even if imagined) lingered throughout my visit, and well after it too.

Graham’s ‘offerings’ were not just a gesture of respect and memorial, but they were also a literal translation of the sickening behavior of the abductors-the only cause of the missing girls and women.

Graham is currently in a Master’s of Fine Arts program and has a PhD in Creative Writing. Her goals are to complete her MFA and publish her first book about America’s cultural obsession with violence.

The exhibition is up in display until November 26th,2013 at the Centre Gallery at USF. 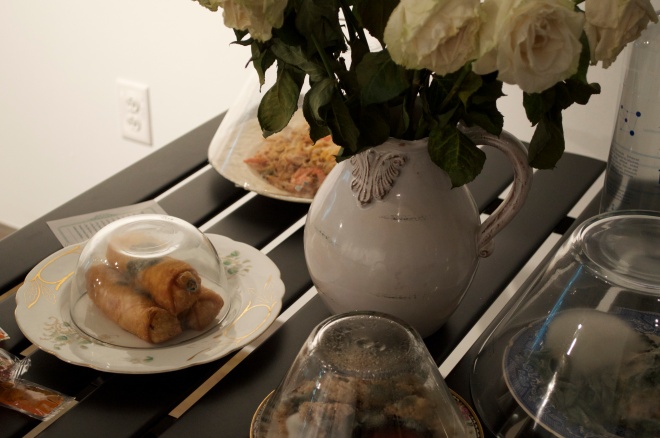 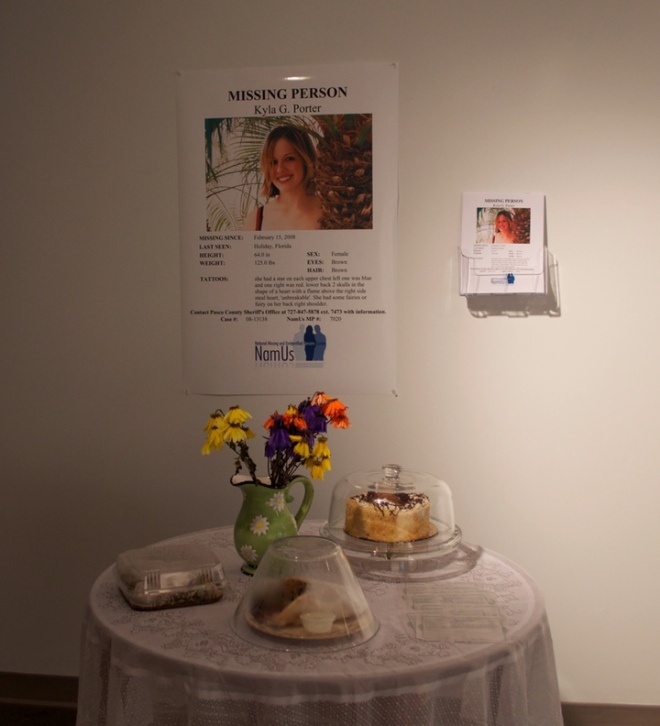 ‘Our Table’ Visualizes the Repulsiveness of Abductions in our Local Community