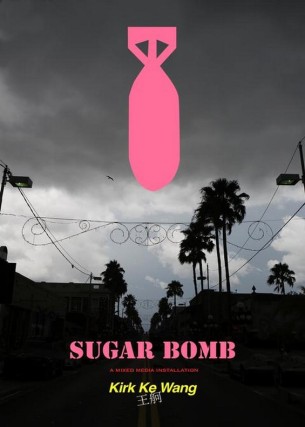 Though not a strict fit for the ‘-ism’, Kirk Ke Wang has the endearing optimism of a Conceptual artist. A project’s plausibility is irrelevant; the idea is everything.

Wang related the idea for his current installation to me a few months ago in his Seminole Heights studio.  However, it was clear to me at the time that, lest it be hung simply as a written description on an index card, the project would almost certainly require some revisions and compromises.  Meanwhile, its less plausible aspects illustrated exactly how comprehensive his concept is – little in the installation Sugar Bomb is incidental.

To that end, while Wang’s installations are perhaps becoming more ambitious in size, it is these little and seemingly incidental details that may be the most effective components.  A “bomb” papered with tobacco leaves are as much a wave to Cuba as they are a nod to Ybor city, where the gallery can be found.  They hint at the laborers that harvested them and the immigrants who rolled them.  It’s likely the tobacco leaf would only operate with such potency in Ybor City.  Still, it’s a rare object that at once wields subtlety and power while navigating away from cliché.  The bombs scattered through the installation are literally filled with such symbolism – bomb casings contain toy soldiers, Skittles, sugar. 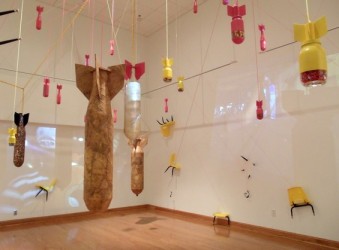 The playfully colored bombs and their pleasant payload imply that they are not weapons of firepower but weapons of desire and information.  It is unclear who the bombs are intended to target or who dispatched them.  In some way, perhaps, the bombs are from and for everyone.

However, Wang’s foremost talent isn’t with these symbols.  Really, the metaphor would be a bit heavy-handed if it weren’t so carefully and complexly layered.  Rather, Wang shines in his ability to present conversations ready to be had.  He continues in his statement, “I hope the paradox and irony of “bombs” made of “sweets” would instigate a debate about our mental state of fear in today’s seemingly dangerous world.  What about things that appear lethal yet taste good?  What about real threats disguised under the sweetness?” 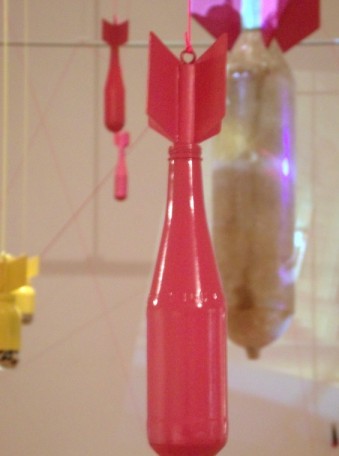 His installations avoid dogmatizing, instead revealing an issue’s complexity and asking for its careful consideration.  In Sugar Bomb, Wang presents global politics as seen by a Chinese man moving through America, and an American man moving through Cuba.  It’s difficult, if not impossible, to discern what is right (morally) or even right (correct) in any viewpoint.

Wang isn’t being reckless here with his installation’s concept: complexity shouldn’t be mistaken for ambiguity.  When the works asks “Should we fear?”, it isn’t looking for “I don’t know.”  Its looking for the beginning of a discussion that leads out of the gallery doors and on to Ybor’s brick streets.  With that objective, Sugar Bomb definitely hits its target.

Sugar Bomb will be on view through September 30.  A reception an artists talk is scheduled for Thursday September 12 5pm-8pm.  All events take place at the HCC Performing Arts building gallery.